A resolution of the European Parliament, adopted on the 23rd of November 2016, refers to Russian propaganda in the space of the European Union, but also in the neighbouring countries. The document recommends more activities aimed at informing the public and investments in investigative journalism.

The text mentions an increase of Russian propaganda following the annexation of Crimea and the beginning of the hybrid war in Donbas. The Russian government is aggressively applying a large range of instruments, such as think tanks, multi-linguistic TV stations (such as Russia today), pseudo-news-agencies (such as Sputnik), social media and Internet trolls, to provoke and divide Europe and to create the perception of failed states in the eastern neighbourhood of the European Union. 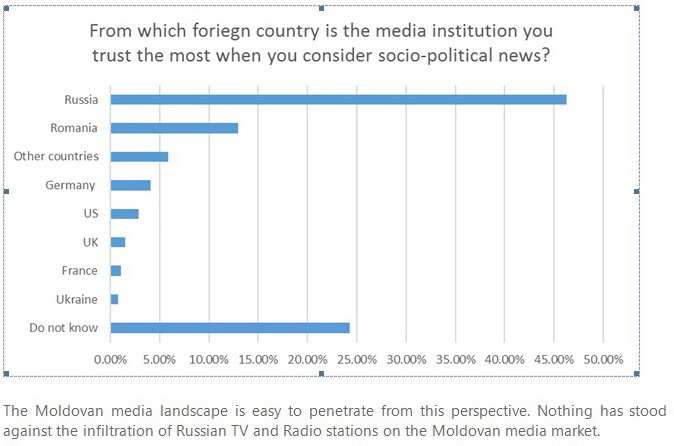 Approximately 60% of the TV stations that broadcast in the Republic of Moldova are of Russian language, said the president of the Coordinating Council of the Audio-visual (CCA), Dinu Ciocan. Not all of them broadcast news and informative-analytic shows, as the majority run entertainment programmes. With respect to the resolution of the European Parliament, Dinu Ciocan mentioned that he has not seen it yet, but that he believes it to be a useful document for the Republic of Moldova: "I believe that we could have something to take and implement in our country, because this problem exists”, stated Ciocan for Report.md.

Among the measures taken by the CCA, the president of the institution mentioned the 2015 monitoring reports, following which the broadcast of the Rossia 24 TV station on the territory of the Republic of Moldova was stopped. In the spring of 2015, after the annexation of Crimea by Russia, when Russian media attacks intensified, CCA monitored a few TV stations that were re-broadcasting news programmes and shows from the Russian Federation. It was then, when CCA decided to stop the re-broadcast of the Rossia 24 TV station and also to sanction TV Prime, RTR Moldova, REN TV and TV7. The CCA`s report concluded back then that the news and analytic programmes re-transmitted on the territory of the Republic of Moldova from the Russian Federation through the aforementioned TV stations were misinforming and manipulating  through their coverage of the situation in Ukraine, but also of Moldova. For example, in a story broadcast by Rossia 24, with the title ”Mejdu dvuh ogney” (”Between two fires”), it was argued that "the Republic of Moldova maintains its suicide path towards Europe”.

Afterwards, however, CCA went back and voted for more Russian propaganda in the Moldovan audio-visual landscape. In August 2016, CCA extended the broadcast license to 7 years for the "Radio Alla” station, which transmits the informative and analytic programmes of the "Sputnik” network – mentioned in the resolution of the European Parliament.

Seven of the nine members of the CCA voted "Pro”, and the president of the Council, Dinu Ciocan, argued that the programmes of the Radio Station will be monitored if they respect or not objectivity and the plurality of ideas. The administrator of the station declared at the time that the news and the programmes are offered free of charge, reason for which they decided to renounce their own production in favour of that delivered by "Sputnik”. This is not the only station that is re-transmitting "Sputnik” programmes in Moldova. The news bulletins of the agency are also broadcast by the "Hit FM” station. At the same meeting, CCA voted to assigning a frequency that belonged to a local Radio Station to the "Russkoe Radio” station.

The Russian NTV has passed to Dodon

In December 2015, CCA awarded a broadcast license to the NTV Moldova station, which re-transmits the Russion NTV station, after TV7 replaced the programmes of the latter with in-house productions. Initially, CCA refused to award a license for NTV Moldova, demanding the removal of Russian shows from the programme. But the president of CCA, Dinu Ciocan, argued that one must not constrain the development of the informational space in the Republic of Moldova. Afterwards, during the presidential electoral campaign, the monitoring actions developed by civil society actors and those by the CCA showed that the station massively favoured the candidate of the Socialist Party, the pro-Russian Igor Dodon.

"Free cheese” from the mouse trap

The Director of the Centre for Independent Journalism, Nadine Gogu, explains the avalanche of Russian station through the desire of media owners to attract more publicity, without going through too much effort in elaborating their own shows. "They parasitized on the products of others, because they attracted publicity, and they were not going through too much effort for it”, says Nadine Gogu. She reminded the TV7 case, which, when it announced that it renounces the re-transmission of the news and opinion shows of the Russian NTV, also remained without the capacity of transmitting the entertainment shows of the same TV station, because they came together as a package. "The true intention was revealed. The interest was to have manipulating news being re-transmitted. So, it`s clear, nothing is free, it`s like the cheese from a mouse trap”, said Nadine Gogu.

According to her, the most efficient countermeasures against Russian manipulation and propaganda are permanently monitoring through the CCA the stations that are re-transmitting Russian programmes and sanctioning them, even in accordance with the current law that allows gradual punishments. If the CCA would apply the law for a year, because of their promotion of propaganda, the stations that are re-transmitting Russian programmes would run out of the chances offered by the law and would remain without licences.

Putin: ”the Resolution is a sign of democratic degradation in the West”

In Russia, the European Parliament debate was the first news of the journals broadcast by TV stations, followed by internal affairs topics, according to the RFI correspondent in Moscow, cited by Digi 24. President Vladimir Putin argued that the resolution of the European Parliament "is a sign of the degradation of the idea of democracy in the West”.

The resolution also refers to the propaganda attacks launched by the terrorist organisation the Islamic State. One of the authors of the resolution, the Polish conservative MEP, Anna Fotya, spoked about the propaganda managed by state and non-state actors which aims to "distort trust, to induce fear and insecurity among citizens, to provoke doubts and division in the European Union”.

The report also shows that political parties and other organisations from the European Union are being financed through the Kremlin.

„Sputnik” accuses the EU of censorship

The "Sputnik” network, mentioned in the report, ramified in the entire world, with offices even in Chișinău, has called the resolution an attack against freedom of speech and has sent a letter to the UN, UNESCO and "Reporters without borders”. The agency is victimizing itself and highlights European norms, noting that the resolution is targeting media institutions with international authority, „Sputnik” included. "The resolution of the European Parliament contains many baseless accusations, compares the activity of press institutions such as „Sputnik” with the activity of terrorist groups such as ISIS”, notes the press release of the Russian agency.

After the Moldovan CCA voted to award a license to NTV Moldova, a series of media experts and political analysists from Chișinău spoked about a deal that took place between the oligarch Vlad Plahotniuc, who now holds the power in Moldova, and the pro-Russian socialist Igor Dodon. It was suggested that the CCA is an institution subordinated to Plahotniuc. Later, during the presidential electoral campaign, both „NTV Moldova” and the holding of Vlad Plahotniuc (which according to some estimates covers more than 85% of the Moldovan media market) promoted propaganda favouring Igor Dodon.